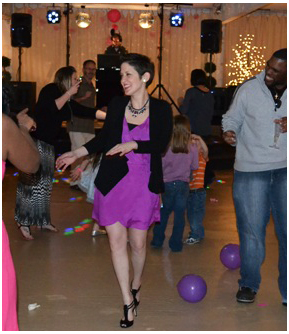 When Rachel received the news that the small bump she found in her breast was actually a very aggressive form of breast cancer, Invasive Lobular Carcinoma, she was shocked. She found out just as she was turning 34. Rachel is a self-employed single mother of two wonderful boys. After diagnosis, she moved forward with a double mastectomy very quickly. Although an MRI the week before surgery showed no signs of the cancer spreading, everyone was surprised that the cancer had moved on to some of her lymph nodes. Since the cancer spread, she needed an aggressive chemo treatment commenced shortly after surgery, and Rachel faced an uphill battle over the next year. Through it all, Rachel kept a positive outlook and unbelievable faith.

Rachel’s FAB-U-WISHOne day while in the hospital after her last surgery, Rachel received a surprise phone call from her dear friend Heather and Lindsay, from FAB-U-WISH. Unbeknownst to Rachel, Heather had sent them her story, and she was about to have her wish granted. Rachel wished to throw a party as a way to lavishly thank all of the people who had been actively involved in supporting her throughout the past year. She thought that the biggest treat she could give to everyone would be a night of fun with kids and all. Her wish was to party, dance, and celebrate life, but mostly to celebrate the huge hearts of the people that had been battling beside her. The evening at Port Orchard Pavilion included catering from Cosmos of Port Orchard, DJ Ray from RJ Musical Entertainment. Jonathan Reed, one of Rachel’s favorite anointed singers kicked off the party with a couple of worship songs, followed by a champagne (or sparkling cider for the kids) toast to Rachel’s health. The opportunity to thank and celebrate everyone was truly a wish come true!