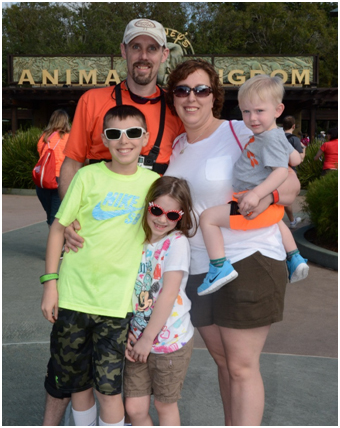 At the young age of 24 years old, Michele found out the devastating newsimg4.jpg that her mother had cancer. Michele was pregnant during her mother’s battle with cancer, so her friends threw her baby shower at her mother’s care center. Although she put up an incredible fight, Michele’s mother unfortunately lost her battle just two weeks after Michele’s first baby was born. At only 25 years old, a first time mother herself, Michele was left without any parents to lean on.

A few years after her mother’s passing and the birth of her third baby, Michele discovered that she herself had breast cancer. She had no health insurance, no parents to help her, and since she just moved to a new state, no support of friends close by. But, she continued to fight. By the age of 36, Michele had already undergone a mastectomy, chemo, and a hysterectomy. We are happy that she is now in remission, but she still has a long battle ahead of her.

Michele was nominated for FAB-U-WISH by her longtime friend Kelly, who vacationed together with Michele’s mother as children. Kelly wanted Michele to have the opportunity to create experiences and memories just like they did on their childhood vacations. Knowing a vacation was too much of a financial strain, Kelly reached out to FAB-U-WISH, and we were more than happy to step in and give Michele the chance to make special memories with her family. Michele and her family were flown to Disney World in Florida where they enjoyed a magical week spending time with one another. Visiting the parks, enjoying the sun, and making lasting memories – we were honored to be a part of it!